I apologize for the long break in posts (Life has a funny way of getting in the way).

This quick post is sort of an update on a previous post. If you recall, I had shared my intentions to create a DIY camera rig. Well, that project has still not come to fruition (No, I haven’t scrapped it, I’ve just put it on the shelf … for now). I did however, start another project … behold my creation! 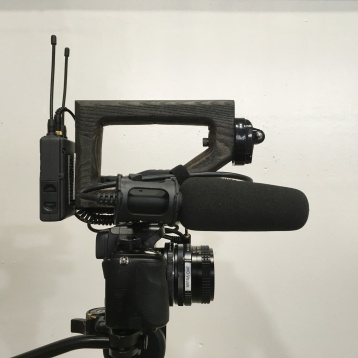 What is it? Essentially, its my personal take on a DIY camera top handle. I got the idea from dslrvideoshooter. Caleb Pike created a DIY solution to create a top handle for a Panasonic GH4. The rest of the ideas came from this “hot-rodded” C100. My rig isn’t as slick but it has helped clean up my personal camera setup and has the added benefit of being able to migrate to multiple camera bodies (rig on Canon 5D and Sony A7s below).

Before I get into the details of the components and how I have been using them, I would like to briefly share the build process.

The main part of the rig is the handle. It is made out of a block of solid wood (Not sure what type of wood). After cutting and shaping it to the form that I liked, I stained it a dark walnut finish. Next, I added a Tripod Screw-to-Shoe Adapter to the bottom of the handle, in order to attach the rig to a camera’s Hot Shoe.

For attaching other components, I used super-velcro, as it is secure and easily modified in the future. For extra security, I tacked a few staples through the velcro on the handle.

For attaching the mic, I simply used a 1/4 20bolt, through the handle to the female thread on the shock mount holder for the mic.

On front of handle, I used some spare GoPro mounts to create a Quick-Release for attaching things like an LED Light, GoPro, or even an iPhone for tele-prompting.

As already mentioned, the primary component is the handle. The rest of the components are as follows:

Mic Preamp  While some may consider it sacrilegious, I think that to successfully operate in a “run n’ gun/one-man crew” type environment, a rig has to be able to capture on-camera audio effectively. Now, most of you are already aware, that DSLR/Mirrorless cameras, are not the most suitable for that. However, utilizing a mic preamp can really improve the on-board audio as well as provide finer control over things like gain, and in the case of the specific model I’m using (Saramonic SmartRig +), adds phantom power.

Stereo Mic  Nothing special here, just an old phantom-powered mic from an older camera, that provides an improvement over the factory camera mic.

Wireless Lav Kit  When conducting interviews, nothing beats the convenience of using a lavalier mic. I prefer a wireless kit (I’m using the Saramonic UwMic10), as it provides total freedom of movement, both for camera and subject. I find this  especially helpful when doing walk-and-talks or other dynamic types of shots (However, I always pack a wired lav mic as well … just in case).

Vari-ND Filter  Since most DSLR/Mirrorless cameras do not have built in ND filters, using external ND’s is necessary to shoot at a desirable Aperture/Shutter Speed. I prefer using square filters, but for “run n’ gun”, it’s hard to beat the convenience of a screw-on Vari-ND filter.

LCD Loupe  A loupe or Sun Screen for your camera’s LCD is very useful, especially when filming outdoors. I’ve had this specific model for a while now. It simply slips onto the screen and can be added or removed very quickly! As a side note, I’ve found that a tilting/articulating screen is really convenient for “run n’ gun” shooting.

iPhone w/ i-Prompt Pro App  Eventually, I would like to include Vlogs to this site. So, I wanted to add a simple tele-prompting system to my rig. Utilizing the GoPro mount on front of the rig, I am able to attach my iPhone with a prompter app. This also works if I want to conduct direct-to-camera interviews, as I can project the interviewer’s face on the iPhone using FaceTime.

Quick-Release Plate  This is not technically part of the rig, but for the camera itself, I always use a standardized QR Tripod Plate so that I can quickly transition from a tripod to a slider, to gimbal (I have to remove rig when using a gimbal), or to any other device. In this case, I’ve have been using a Manfrotto 200-PL14 style Quick-Release combo.  One thing I don’t like about this adapter, is that it doesn’t balance very well, especially  if using longer lens. Eventually, I would like to change out to something like an ARRI Dovetail style Quick-Release system.

I’ve had the chance to use this rig now a few times, and I have really enjoyed it! Instead of things hanging off the camera, now I have a clean and streamlined rig. Additionally, when shooting hand-held, it provides ergonomic points of contact for more control. 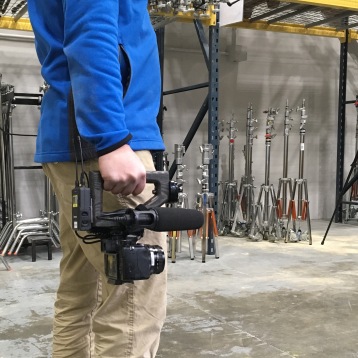 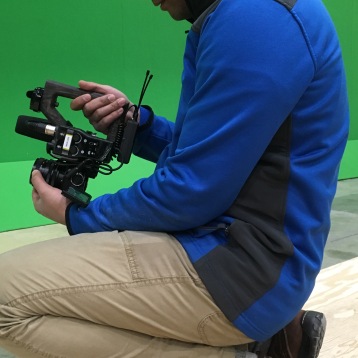 However, I have found some limitations. For example, since I am using the camera hot-shoe for mounting, this rig is really not designed to hold a lot of weight. I would never lift the camera and tripod with this handle. I would even hesitate to hold camera with this handle if I was using a baseplate and rod setup.

In the future, I may remake the handle and make it slightly shorter, to make it more streamlined. That being said, for the cost and for what it is, I’ve found that it has really improved my over-all “run n’ gun” setup. It’s even breathed new life to my “old” GH2!

Hope you enjoyed this short article. I hope to get back to a more regular schedule of posting articles soon!