As of late, there has been a seeming resurgence in 16mm filmmaking, specifically Super 16, both in analogue and digital formats.

“Carol”, a 2016 Oscar nominated film shot by Ed Lachman ASC, was shot on analogue Super 16 format. BlackMagic Camera recently announced two new Super 16 digital cameras. And, not to be left out, Sony has updated their FS7 with “crop mode” (already available on the F5/F55 cameras) that creates a Super 16 center-crop out of the native Super 35 sensor.

[Update 3/1/2016: ARRI just released SUP (Soft Ware Update) 4.0 for the the ALEXA MINI and AMIRA which enables a 16mm center crop of sensor – much likes Sony’s FS5/FS7/F5/F55 lines. This center crop results in a HD image with slight upscale.]

What were the trade offs? Lets examine four areas: 1) Field of View, 2) Resolution, 3) Color, and 4) Exposure Latitude. There are others factors but I feel these are the main concepts.

Field of View By reducing the physical size of the film frame, there is also a reduction in the relative field-of-view (FOV), if using same focal length lens. Below is an example:

As you can see from the example above, the FOV is effectively reduced by 1/2. In order to  achieve similar fields of view, one would need to either reduce the lens focal length by 1/2 – if going from 35mm to 16mm,  or double it – if going from 16mm to 35mm.

One thing to bear in mind , matching the FOV of 16mm and 35mm will result in a difference in depth-of-field (DOF) since different focal lengths are used (assuming others factors such as lens stop and ISO/ASA are the same). Typically speaking, 35mm will appear to have shallower DOF since longer lenses are used.

Resolution Since there is no definitive way of quantifying the resolution of celluloid film, it’s difficult to use this as a comparison. However, grain structure or the “perception” of grain can be used for comparison.

Since 16mm film is created using the same negative stock as 35mm film, there is inherently no difference in grain structure. Yet, 16mm film can appear “grainier”. How so?

Well, when 16mm film is projected, it needs to be magnified more to match standard 35mm film. This increased magnification also increases the “perceived” size of the film grain, which could then look “grainier” when compared to a 35mm projection even though they came from the same negative stock.

This is where things get a little more convoluted because when comparing different digital formats, there are more variables.

FOV A digital 16mm sensor is about 1/2 smaller then a 35mm digital sensor so the impact is the same as when comparing their analogue counterparts.

Resolution Digital sensors have a finite number pixels. How many of  these you pack into a specific area will be dependent on the physical size of each pixel (known as pixel pitch).

Since there is no standard pixel pitch it is possible to get different resolutions even when comparing the same format! For example, as mentioned earlier, BlackMagic recently released two Super 16 digital cameras and yet they have different resolutions – the Micro Cinema Camera is a HD (1920×1080) sensor while the Micro Studio is a QHD (3840×2160) sensor!

When comparing cameras that have a center crop mode, things start to look more similar to analogue. For example, the Super 16 mode on the Sony FS7/F5/F55 is achieved by “cropping” out an area of the native Super 35/4k sensor . This results in an capture area roughly equivalent in size to a Super 16 film frame but with a resolution of only 2k.

Color If looking at a camera that has both a 35mm format and a 16mm format (center scan), the results should be the same.

However, if comparing different sensors and especially from different manufacturers, there can literally be “a world of difference”.

What’s the sensor color science? Is the sensor 8bit or 10bit? Is it 420 or 422? What is the picture profile/hyper gamma being used?  And so on and so forth…

Exposure Latitude Again, if looking at camera that has both a 35mm format and a 16mm format (center scan), the results should be the same.

When comparing different sensors, you have a large range, even from the same manufacturer. For example, the BlackMagic Micro Camera is manufacturer rated at 13 stops of latitude while the Micro Studio is purportedly less!

So, as you can see, digital 16mm format is not as straight forward as it’s analogue counterpart. My recommendation, “do your research!” Compare the pros and cons of each and compare those to your needs.

While my primary preference is still the 35mm format, I do enjoy 16mm. I have shot quite a lot on the digital m43 format which is very similar to Super 16mm (a future post will delve more deeply into different formats). So, what makes 16mm appealing?

DOF I am often a solo-shooter. So, while I like “out-of-focus bokeh” as much as the next guy, ultra shallow depth of field can be a pain when your “runnin n’ gunnin”.

Also, I don’t think lack of DOF limits me creatively. I typically shoot with a deep stop (t4 – 5.6) anyways, even for narrative content, so super shallow DOF really gets me nothing unless its for a specific shot.

[Update 7/04/16: Just to clear up some confusion…capture format (size/shape of capturing sensor/film frame), does NOT directly impact DOF. DOF is a function of a lens alone and is affected by Focal Length, Aperture, and Focus Distance. Indirectly, the smaller format of S16 typically means the use of wider lensesto achieve similar FOV to larger formats. It is the use of wider and often slower lenses that causes a deepr DOF.]

Lens Selection 16mm format allows access to a wider range of lenses. Lenses that would NOT cover 35mm could potentially work on 16mm. This includes many older, cheaper, but still excellent c-mount lenses! And, you can still use lenses designed for 35mm.

Nostalgia I don’t know, there is just something about filming on 16mm format that makes me  feel like part of history. When your running around, “doc-style”, I can’t help but feel like one of the pioneers of cin’ema v’erit’e!

[Update 4/5/2016: Just stumbled across this fantastic overview of filming on analogue Super16 –  http://blog.kitsplit.com/shooting-super-16-in-the-digital-age/.] 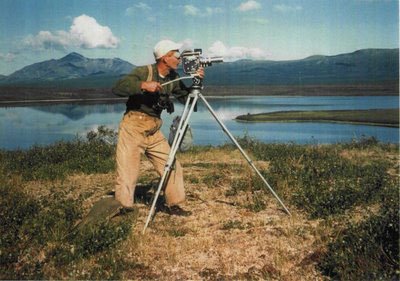 In the near future, I hope to start a project to create a digital 16mm camera (based off an existing camera) that mimics some of the “old school” styling of legacy 16mm cameras. Stay tuned!

In conclusion, it is a fantastic time to be a filmmaker. We have access to such a variety of tools! So what are you waiting for? Get out there and shoot!